Despite the lower crop, it is expected to continue strengthening Spain’s commercial position in the EU, where Spain has already surpassed Florida and Israel in market share.

AILIMPO’s grapefruit production estimate for the 2019/2020 season indicates a crop forecast in Spain of 60,740 tonnes, a figure which means a significant drop in supply this year due to weather conditions.

This crop volume allows the sector to face this new season with optimism. The global reduction in supply in Europe will stress the market and prices for Spanish grapefruit are expected to increase from the start of export.

The start of the Spanish season will begin in October with a majority supply of big grades while the stocks from the Mexican season are being sold out.

The season will be shorter than usual and will end in March.

The 2018/2019 season, which ended in june, has closed with a total harvest of 82,082 tonnes, the main destination of which was export to the German and French markets which represent 54% of our total sales with more than 30,000 tonnes. A small quantity was exported to third country markets (2,868 tonnes) and the effort to gradually open and consolidate markets such as Switzerland, South Africa and Canada should be highlighted. For its part, the domestic market is estimated at 7,000 tonnes. Finally, 11,700 tonnes were processed. 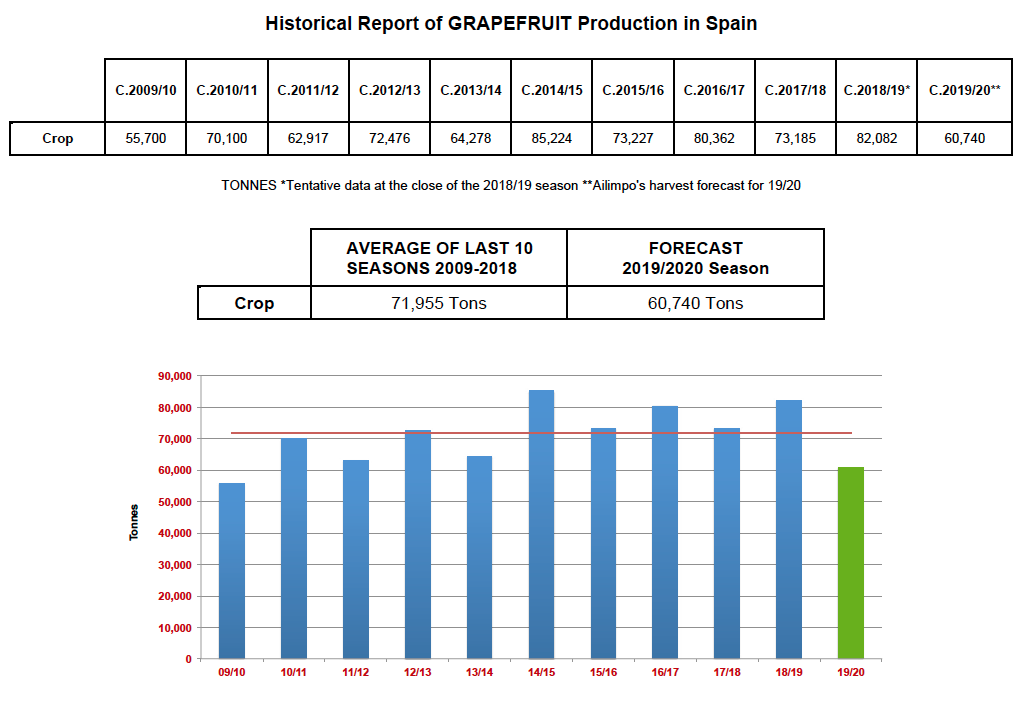 Note on Methodology: Ailimpo drew up this technical report following the working protocol, using information provided by surveys given to producers, cooperatives, exporters, and processing industries, in addition to field information from its control farms.

By law, its functions include: Ensuring the proper operation of the food supply chain, Drawing up agri-food contracts and developing methods for monitoring and streamlining the use of phytosanitary products to guarantee the quality of the products and the protection of the environment, and Boosting and promoting quality and excellence standards in the sector