AILIMPO estimates that Spain will return to normal harvest levels with 1,104,000 tonnes, an overall decrease of 14%.

Spain will consolidate its leading position in conventional and organic lemon by betting on sustainable production and the GLOBALGAP and GRASP certifications.

AILIMPO’s first estimate of the lemon harvest for next season 2019/2020, forecasts a total production in Spain of 1,104,000 tonnes, representing an overall decrease of 14% compared to the 2018/2019 season when production reached record levels. This first crop estimate will be confirmed depending on the availability of water in summer and autumn rains.

The estimated global lemon production figure in Spain of 1,104,000 tonnes will allow Spain to continue to be the leading exporter of fresh lemon, and the second largest processor of lemon juice, essential oil and dehydrated peel in the world.

In the case of the FINO LEMON variety, a slight decrease of 8% is estimated which will basically affect the fruit to be harvested in the second part of the season while the availability of lemons in the first part of the season will be normal. Ailimpo has considered the effect of the progressive entry into production of new plantations made in recent years and the situation of the size of lemons at the present time, which is considered optimal thanks to the good availability of water, to estimate a production of 845,000 tonnes.

«This figure for Fino Lemon production will allow Spain to consolidate its leading role in supplying customers and guarantee supply programmes».

As far as the VERNA LEMON harvest is concerned, the first forecast points to a harvest of 260,000 tonnes, which would mean a reduction of 29% compared to the last season in which production was record.

«The reduction in the crop of verna lemon, an autochthonous Spanish variety, is a consequence of the resting of the trees after a record production season. In any case, the harvest estimate of 260,000 tonnes guarantees that the Spanish lemon supply will cover a large part of summer 2020 with good quality fruit».

AILIMPO expects a good and fair balance of prices and distribution of economic value throughout the chain, which will allow the Spanish lemon sector to give a profitable commercial outlet to the harvest, while maintaining commercial competitiveness against the aggressive supply of lemon from competing third countries such as Turkey (which will continue to be subject to official pesticide controls at the European border) or Egypt.

Furthermore, from the producer’s point of view, the GlobalGAP and GRASP certifications are key elements for the next season, within the interprofessional strategy based on  promoting sustainable production under the triple focus: economic, environmental and social. 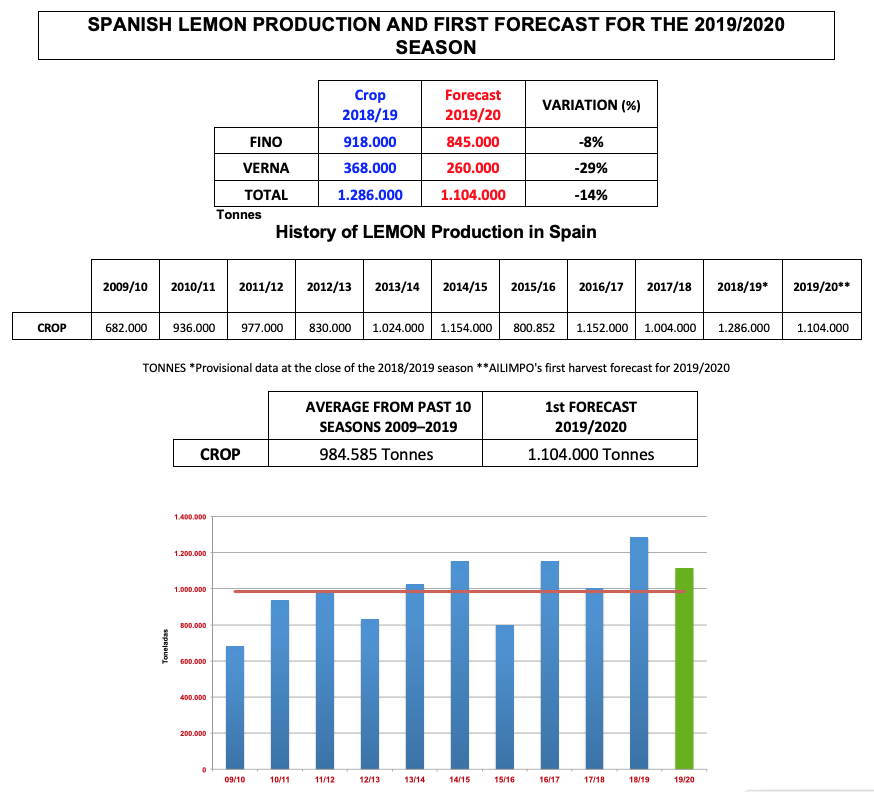 Coming updates: AILIMPO will update its harvest forecast on:

Note on methodology:AILIMPO has drawn up this technical report following the working protocol, using information from surveys taken by producers, cooperatives, exporters and processing industries in addition to field information from its control farms.

AILIMPO is a Spanish inter-professional association based in Murcia, officially recognised by the Spanish Ministry of Agriculture and the European Commission and representing the economic interests of producers, cooperatives, exporters and lemon and grapefruit industries in Spain – a sector in which Spain is the world leader for the export of fresh lemons and 2nd in the ranking for processing countries with an annual turnover of €700 million, generating more than 20,000 direct jobs and a turnover of more than €250 million in related industries.

By law, its functions include: ensuring the proper operation of the food supply chain, drawing up agri-food contracts and developing methods for monitoring and streamlining the use of phytosanitary products to guarantee product quality and the protection of the environment and also encouraging and promoting quality standards and excellence within the sector.