AILIMPO estimates a GRAPEFRUIT harvest in Spain of 76,000 tonnes for the 2018/2019 Season, same crop as previous season

It is expected to continue strengthening Spain’s commercial position in the EU, where Spain has already surpassed Florida and Israel in market share.

AILIMPO’s grapefruit production estimate for the 2018/2019 season indicates a harvest of 76,000 tonnes, which is a similar crop to the one achieved last season.

This volume allows the Spanish sector to be optimistic as in terms of quality Spanish grapefruit is well appreciated. Nevertheless, the devaluation of the Turkish Lira may have an effect and has to be considered especially in those markets very sensitive to price, despite Spanish grapefruit is a distinctly better quality than Turkish.

The Spanish season will start at the end of October offering big grades to satisfy the demand for this kind of fruit. Meanwhile we will wait for the end of stocks of small grades from South Africa as well as the end of Mexican season.

Overall, Spanish grapefruit has clearly become a leading and essential source in the EU for meeting demand from November to April.

The 2017/2018 season closed with a total harvest of 76,104 tonnes, which was mainly exported to Germany and France, representing 57% of our total sales at 30,000 tonnes. A small amount was exported to markets in overseas countries (3,016 tonnes), where there was a sharp increase of 19%; also, an outstanding effort has been made to open and strengthen markets such as Switzerland, Canada and South Africa. The domestic market was estimated at 10,000 tonnes, and the industry also processed 10,000 tonnes. 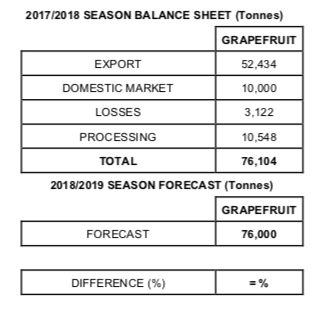 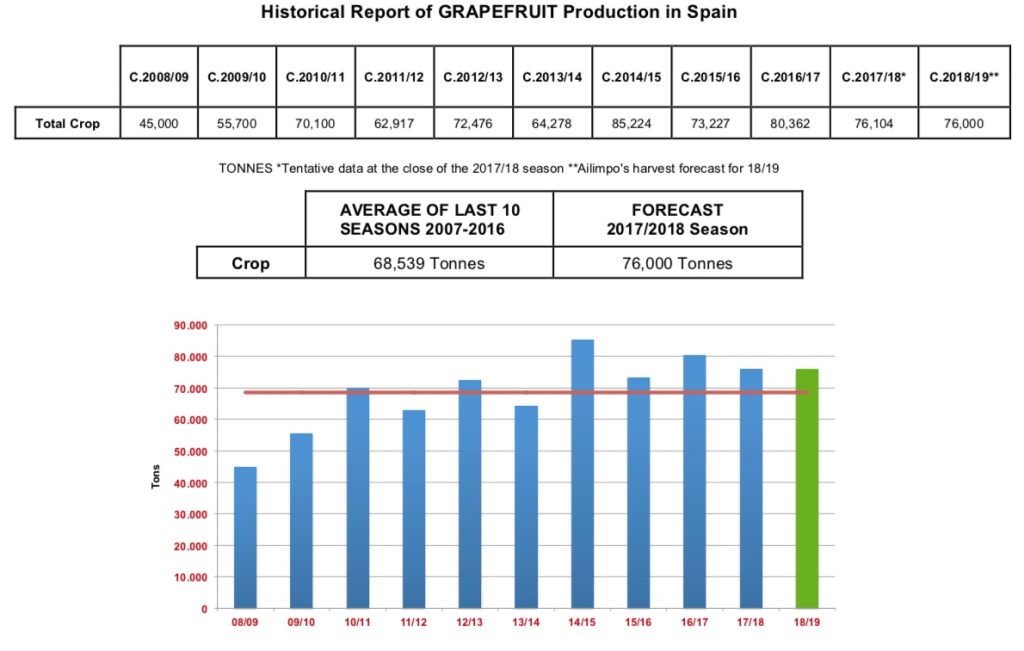 Note on Methodology: Ailimpo drew up this technical report following the working protocol, using information provided by surveys given to producers, cooperatives, exporters, and processing industries, in addition to field information from its control farms.

The lemon and grapefruit sector contributes to environmental sustainability, with a positive net balance of 304,840 tonnes of CO2 captured per year.

By law, its functions include: Ensuring the proper operation of the food supply chain, Drawing up agri-food contracts and developing methods for monitoring and streamlining the use of phytosanitary products to guarantee the quality of the products and the protection of the environment, and Boosting and promoting quality and excellence standards in the sector