Uneven performance by the Fino and Verna varieties

Spain will consolidate its leadership position with sustainable production and GLOBALG.A.P. and GRASP certifications, which are becoming essential.

AILIMPO’s first forecast (preliminary appraisal) for the lemon harvest for the 2018/2019 season foresees production of 1,300,000 tonnes in Spain with uneven growth of the two Spanish varieties: Fino and Verna.

Based on this data, Spain will continue to be the main supplier of fresh lemons in the European market and the second processing country worldwide.

Harvesting of the Fino variety will begin in September and an increase of 14% is expected due to good flowering conditions—leading to more fruit per tree—and also because of new plantations over recent years now coming into production. A production figure of 920,000 tonnes is forecast, dependent on the amount of water available in summer and rainfall in autumn.

As regards the Verna variety, the preliminary forecast expects a harvest of 380,000 tonnes, which would be a significant increase of 90% in comparison with last year—when production was very low—or 38% compared to the average harvest for the past two seasons (+9% if compared with 2016/2017 season).

“Excellent flowering, new plantations coming into production and the impact of grafting orange trees with Verna lemon trees explain the strong growth of this native Spanish variety, which is marketed over the summer months, meaning Spanish supply will be available during most part of next 2019 summer”

The overall figure for lemon production in Spain of 1,300,000 tonnes will allow the sector to consolidate its export volume of fresh fruit to EU markets—where Spain has the highest market share—for the upcoming season. In addition, as this harvest volume includes both the Fino and Verna varieties, activity can be maintained almost all year round and exports can be boosted to third markets outside the EU, such as the Middle East, Canada and Brazil, extending the diversification of markets started by the export sector a few years ago. With this harvest forecast, the lemon processing industry into juice, essential oils and dehydrated peel expects to return to normal lemon processing activity, where Spain ranks second in the world and which plays a key role in regulating supply and market balance.

Lastly, in the context of this harvest volume, AILIMPO expects a proper balance of pricing and distribution of financial value along the chain, allowing the Spanish lemon sector to make a profit from the harvest while also retaining market competitiveness against the supply of lemons from other producing countries.

From a production perspective, theGLOBALG.A.P. and GRASP certifications will be key elements for the upcoming season, within the inter-professional policy of promoting sustainable production based on three main areas: financial, environmental and social. 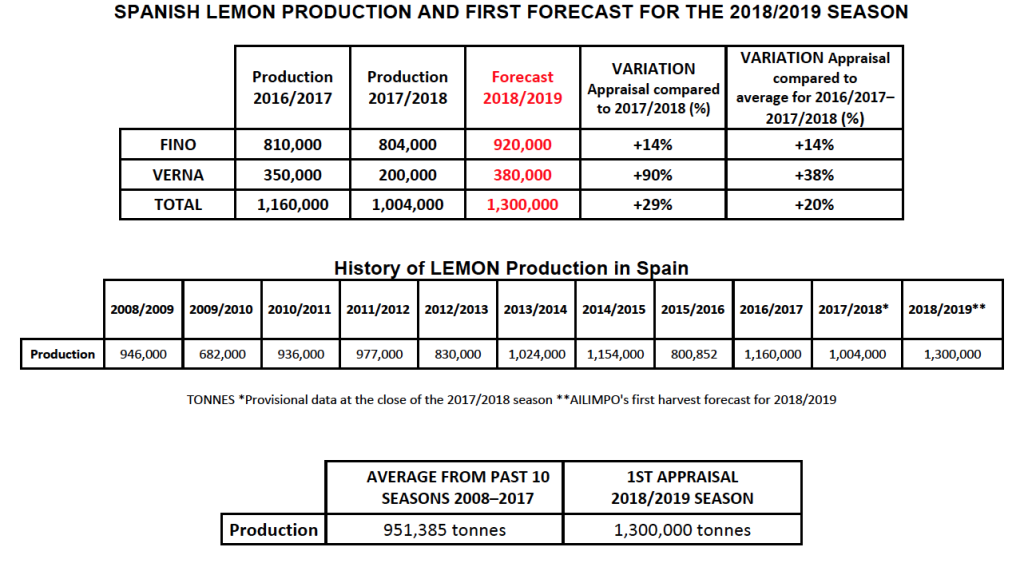 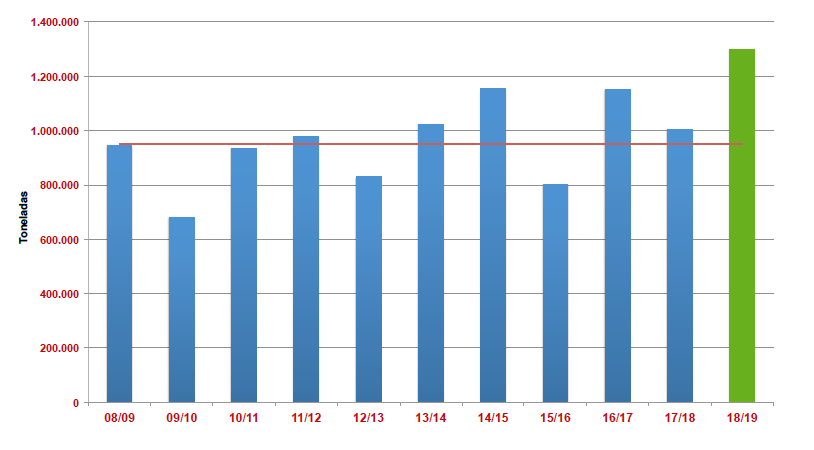 Coming updates: AILIMPO will update its harvest forecast on:

AILIMPO has drawn up this technical report following the working protocol, using information from surveys taken by producers, cooperatives, exporters and processing industries in addition to field information from its control farms.

AILIMPO is a Spanish inter-professional association based in Murcia, officially recognised by the Spanish Ministry of Agriculture and the European Commission and representing the economic interests of producers, cooperatives, exporters and lemon and grapefruit industries in Spain – a sector in which Spain is the world leader for the export of fresh lemons and 2nd in the ranking for processing countries with an annual turnover of €700 million, generating more than 20,000 direct jobs and a turnover of more than €250 million in related industries.

By law, its functions include: ensuring the proper operation of the food supply chain, drawing up agri-food contracts and developing methods for monitoring and streamlining the use of phytosanitary products to guarantee product quality and the protection of the environment and also encouraging and promoting quality standards and excellence within the sector.