It is expected to continue strengthening Spain’s commercial position in the EU, where Spain has already surpassed Florida and Israel in market share.

AILIMPO’s grapefruit production estimate for the 2017/2018 season indicates a harvest of 61,000 tonnes, which is 24% lower than the harvest from last season, which was a total of 80,700 tonnes. This season there are fewer pieces of fruit per tree, and larger grapefruits are expected. The production area remains stable, and the decreased crop is due to irregular flowering, which affected production variably. The reduction in harvest is more marked in older fields, while the production estimates for younger fields are similar to last season’s.

Despite this overall decrease, expectations for the sector are good since the Spanish grapefruit winter season has been confirmed as having the second-greatest volume in the EU, after Turkey. However, regarding product quality, Spanish grapefruit is a distinctly better quality than Turkish grapefruit, which gives us a clear potential for growth. Moreover, given the decrease in supply from Florida and Israel, Spanish grapefruit has clearly become a leading and essential source in the EU for meeting demand.

The 2016/2017 season closed with a total harvest of 80,783 tonnes, which was mainly exported to Germany and France, representing 50% of our total sales at 31,000 tonnes. A small amount was exported to markets in overseas countries (2500 tonnes), where there was a sharp increase; also, an outstanding effort has been made to open and strengthen markets such as Switzerland, South Africa, China, Saudi Arabia, and the United Arab Emirates. The domestic market was estimated at 7,000 tonnes, with a slight year-on-year increase and a greater presence of grapefruit in supermarkets and fruit vendors. The industry also processed 10,000 tonnes, absorbing the lowest-quality fruit. 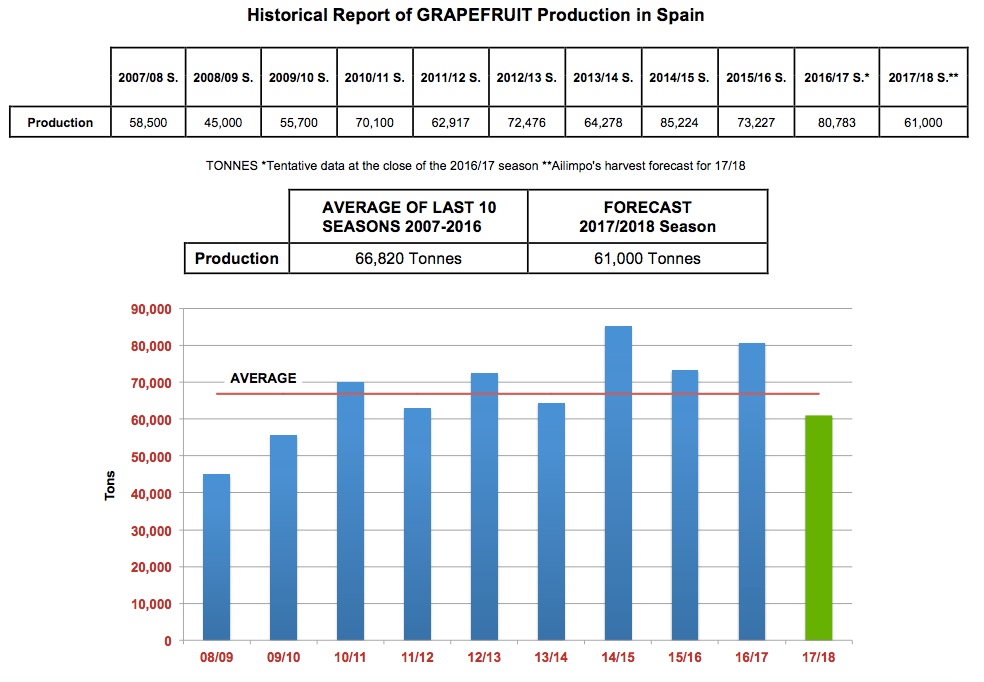